Jesus Was a Black Man?!?

Concedingly taking into full consideration that the student body at Andrews University was not selected from a pool of applicants from the unfallen host, I was, also based on stories/reports previously heard, mentally/spiritually prepared in advance to encounter situations/incidents that would confirm this fact when I set out to attend the school in the late 1990's. Thus, quite early on, when I found my way out of a cloud of weed smoke, (all the while trying not to myself get high from the thick fumes), I was actually not shocked to have run into this particular “smokescreen.” However, I was quite shocked that, when I went and, already traumatized, began to report this to one of the dorm’s deans, angrily declaring that “My room is full of SMOKE” he, clearly not caring at all to ascertain, if this was from a fire, cigarette smoke or, as it was, WEED (as he manifestly fully comprehended), just disturbedly, mutely, or should it, more accurately be, mootly, shruggingly looked at me as if I had just complained about the building’s brick color, -preferring to “bury his head in the sand”.[1] Evidently, but unsure to me then, a ‘smoke-filled room’ was a normative occurrence on this campus, (“self-obviously”, not for a fire). So I then here literally, just had to hold my breath in until the smoke subsided; and also at other times, over the next years, when walking through the dorm halls, (especially during the weekends), sleep with a gas mask (due to a later, weed-chimney-smoking “suitemate”), and pray that this is the worst that it will ever get at this, at-the-very-least-supposed-to-be drug-free, SDA Campus.
Being now quite disillusioned just one month in[2]|[3], by actually the nonchalant, effectively, institutional condoning of such, even illegal, behavior, {and, as expressed here, it indeed is: ‘at the point where passion and treachery meet, that disillusionment begins’}, I hung on to some hope in an assumption that the “religious segment” of this campus was free from such blatant waywardness. {...but any ‘(indifferent) “love” that would be built on such an overall basis of various lies, would indeed be an arduous endeavor’ =Isa 28:14-15ff}... Well it, quite sequiturly, did not take long for that belief to also be blown away.
While perusing through the announcements on a bulletin board in the religious department, there was an announcement for a Sabbath afternoon conference by seminarians that, according to them, would show that, ‘contrary to what has been commonly portrayed, Jesus was actually a Black man.’ Prior to attending Andrews, I had often come across various assertions of this views. I always thought that their clearly unsubstantiated underlying premise was solely quite subjective, and readily dismissed the whole view as such, but here I was faced with this same view on an SDA Campus, and presented by students of the Seminary, during a “BSCF”[4] meeting. In the light of such a believable/credible facade, I, though still reluctantly, gave them the benefit of the doubt here and decided to attend the presentation. Perhaps these supposed “SDA-trained/learned ones” had something substantive, and even Inspired, to present on this topic.
As anticipated, the auditorium was packed, and also as expected, almost all of the attendees were of the Black race. The presentation started, but quite shockingly, to me at least, the same commonly-heard, subjective and baseless arguments were made. I.e., ‘this was all part of a white people’s conspiracy to brainwash (or should it be ‘“whitewash” the view of’) black Christians into believing that Christianity was a white person’s religion and that blacks could not find hope in believing that Jesus was of the same race as them. No doubt an argument that would have, if true, helped stoked the fires of racial slavery and segregation in, e.g., America.[5] Then came the “tipping point” for me. The lead presenter presumed to have Biblical support for his view. He stated that ‘Jesus is said in the Bible to have a skin the color of “fine brass, as if they burned in a furnace”’, which, according to him, could only indicate that Jesus was a Black man, from, thus, Africa. Not having heard before this verse interpreted as such, and for this argument, and not factoring in then that this statement was given in the symbolic description of Christ in Rev 1:14, 15, I still found the jump here itself to a conclusion that ‘Jesus was, specifically, a Black African,’ because of this tidbit of supposed pertinent Biblical description, to still be quite a stretch. I was about to then leave the hall and not waste any more of my time hearing this (as with the dorm party earlier), but rather decided here to stay just to see how this already bad presentation would get worse. The way things were going here, there probably would be a Race March on Campus, or worse, a Riot, when this was done.
So the presentation continued, and sure enough the arguments got more far-fetched, “misconstrusive” and more racially-suggestive, if not, charged. Finally, that was all more than I could passively tolerate. I finally did “tip”. I raised my hand, an interjection that the presenter was not expecting in the middle of his presentation, but he still stopped and granted it. Throttling back my quite bubbling frustration and actual anger here, mainly at having been again disappointed by such blatant, and effectively condoned, waywardness on an SDA Campus, I said, and I quote:

“I do not see what the discussion is all about here - Jesus was not Black!... He was not White!... He was a JEW! So you can just look at a Jew, or even a person in the Middle East, today, and you’ll have a good idea of what Jesus actually looked like!!!”[6]

The silence in the room immediately after this spoke loudly. The presenters on stage bewilderedly looked at themselves. They all had nothing to say in rebuttal, and thus, in defence of their posited view. Apparently they had not taken into consideration this substantive, foundational fact in preparing their presentation. It was also self-evidently quite moot from them to continue with their presentation in the light of this incontrovertible fact. Still they chose to continue, and... having made my point, I left the room.
Early on the next week, I met the lead presenter in the cafeteria. He still had no countering argument for my point. In fact he, effectively, sought to “excuse” his views by the fact that he was actually of the Baptist faith, and not an SDA.[7]
This notion of a non-Adventist attending the SDA Seminary was quite odd to me then, more with the fact that someone not accepting the beliefs of Adventists as Biblical would still find enough theological “wiggle room,” and other unaffected common ground in the SDA Seminary to actually pay to attend it, but still, what was even more disappointing to me then was that other (unsuspecting/trusting) students like me then, could be subjected to such falsehoods on an SDA Campus, and, no less, in a presentation by Seminary students.[8] It seemed to me, at the very least, that the professors of the Seminary should have thoroughly “vetted” such a open-campus/public presentation, for its subject-matter alone, if not also for solely the fact that the lead presenter was not an SDA. Evidently this was the general Status Quo on this SDA campus, both “temporally” and spiritually, as many other such incidents later reaffirmed.
Indeed these early disillusioning incidents showed me that I should not take any thing at face value while attending there (cf. this incident), and now confirmingly looking back, that is certainly a frame of mind that I do not even begin to regret, for in many ways, it forcefully steered me into discovering more accurate (e.g., this), fuller (e.g., this), and actual (e.g., this), Biblical truths.

Just to wrapped things up here in regards to the race/color of Jesus Christ with some inspired confirmation: When Ellen White saw the following painting of Christ, she said that it was the one that most closely resembled the Jesus that she repeatedly saw in her visions: 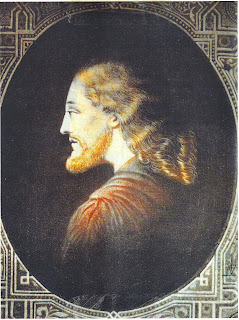 [Stated and Published in an SDA Magazine in the late 1990's. The specific reference currently has not been relocated]

[2] Which actually started in the very first few days with the invited, raunchy guest comedian at the Dorm Welcome Party which everyone present, across the board, found 'oh so funny' and entertaining!?!
And was it only me who saw something quite odd about a laminated sign affixed under the dorm’s lounge’s television that said that: “This TV is only for watching sports and the news.” while there was a 3ABN affiliate (WYGN-LP) beaming its over-the-air signal from an on-campus antenna located just 3,405.87 feet away from the dorm hall. [I personally could not pry my personal TV off of this freely received, blessing of a channel. Quite a spiritual, and learning, resource.] Well apparently so (or not) for when I, one night, inserted, in superscript, with a black marker, the word “3ABN” between the words “watching” and “sports”, deliberately in full view of the looking on, overnight dorm RA (who happened to be a student at the religion department), (hey, what was I to do... complain to a dean again... about now this?!?), it was never wiped off from that sign; for as long as I was there at least.

[And by the way, what's the deal with stall-less|open dorm showers in (Burman Hall's) common floor-wide bathrooms???]

[3] However, as it can be seen in the following November 2010 photo of the Meier Hall Lounge, such explicit reminding, counselling, (bottom-centered), warning is no longer being made.

[4] Unbeknownst to me then (as a first time and just recent attendee at Andrews), “BSCF” which is typically “concealingly”, (in my view/understanding), posted and cited merely by this abbreviation, and [as it] stands for “Black Student Christian Forum”. [The “Christian” part of that name is an inherent oxymoron to the of what that appellation entails, (as it similarly is the case in regards to “SDA Regional Conference”). See a quite funny, yet calculately pointed, but lightly veiled, commenting on this BSCF name and club by, then AU Theology Major [cf. p. 423 here] classmate, Matthew Gamble here [50:13-51:12]. (See his full testimony here (an abbreviated version here)).

[7] Nonetheless, one of his co-presenters, himself an SDA, evidently became more convicted, and later on  “honorarily” saluted me as “Doctor, Doctor” (at least) the next time we crossed paths on campus. Indeed quite a supportive/encouraging salutation for an undergraduate.

[8] How much more “odd” is the inviting of Jesuits in 2008 to lecture at the SDA Theological Seminary on Missions!?! (See this article)

This blog aims to be factual and, at the very least, implicitly documented. Therefore if applicable, any comment which contains unsubstantiated/unsupportable ideas will not be allowed to be published on this blog. Therefore make the effort to be Biblical, truthful and factual.

-It typically takes 1-2 days for an accepted submitted comment to be posted and/or responded to.

[If you leave an "anonymous" comment and, if applicable, would like to know why it may not have been published, resend the comment via email (see profile) to receive the response.]

Use the Free ChangeDetection.com to get email alerts of individual blog posts content changes/updates.

After having read the summary preview of the book: "The Biblical Interpretation of Daniel's 70 Weeks" (see in "Prophecy" category), would you purchase the book?